Vicodin is the brand name for a medication that combines two ingredients:
1. Hydrocodone – an opioid drug with similar effects to morphine or heroin.
2. Acetaminophen – an antipyretic, it reduces fever and pain to a small extent and boosts the effects of hydrocodone.

Vicodin is used to treat moderate to severe pain. When an opioid like hydrocodone enters the body it connects to opioid receptors in the brain, spinal cord, gastrointestinal tract, and other systems. The hydrocodone in Vicodin binds to the mu-opioid receptors that block pain signals on their way to the brain.

Once absorbed, Vicodin has multiple effects:

Lowers feeling of pain
Causes a sense of euphoria, calm, and relaxation

Recreational use of hydrocodone has increased in recent years due to its opioid effects. People are using Vicodin purely for its effect as an opioid, even if they never needed it for controlling chronic pain. Many people assume that because Vicodin is a prescription drug, it is less dangerous or addictive than illegal drugs such as heroin. They crave the feeling of euphoria and achieve it by taking increased doses of Vicodin.

In October 2014, the Drug Enforcement Administration (DEA) rescheduled Vicodin and other drugs combined with hydrocodone from schedule III to schedule II due to high risk for misuse and abuse.

Side effects of Vicodin

The abuse of Vicodin has a range of side effects, some severe. The severity of these Vicodin side effects are one of the reasons many people abusing Vicodin have a hard time detoxing from the drug or quitting altogether.

Common side effects of using Vicodin are:

Serious side effects can include:

Long-term side effects of Vicodin

In the long-term, people abusing Vicodin start overlooking the adverse side effects. They instead focus only on the pleasant, desirable effects. As they continue using Vicodin, they develop tolerance. This means they need to increase the quantity and frequency of their Vicodin doses to achieve the same results, or they may face withdrawal. Tolerance leads to a continuous need for the drug, which in turn leads to Vicodin dependence and addiction.

Addiction and dependency are the result of neuroadaptation. Neuroadaptation is the brain’s ability to create chemical responses to adapt to the presence of an introduced active substance (in this case, Vicodin). As a result, the body can continue to function normally. As the body is exposed to the introduced substance, it self-regulates to maintain balance. This chemical response is automatic.

The natural production of endorphin in the pituitary gland is triggered by internal and external stimuli – stress, pain, and many other activities. Endorphins lower the feeling of pain and create a sense of well-being. External opioids, as found in Vicodin, activate the opioid receptors and suppress the natural production of endorphins. The more opioids that are introduced into the body, the more endorphin/opioid receptors are created. This becomes a never-ending cycle: the more receptors are created, the more opioids a person needs to satisfy this neuro-biochemical demand. Physical dependence on the opioid is created.

As a person is continuously exposed to the introduced substance, the body becomes dependent on it. The new chemical balance becomes the new normal. If the substance is denied, as when a person goes to a detox or stops taking the drug, the body reacts with symptoms we know as withdrawal syndrome.

People dependent on Vicodin cannot stop using it even when they are aware of the consequences. The symptoms of the withdrawal are very unpleasant, physically and psychologically.

Symptoms of Vicodin withdrawal syndrome include:

Even after undergoing detox, cravings for Vicodin may happen years after a person has stopped taking the drug. This is where the difference between the traditional detox treatments and Accelerated Neuro-Regulation (ANR) starts. ANR treats the root of the dependency, making a patient free of the withdrawal symptoms and cravings in a day and a half, while at the same freeing a person of their addiction. Once the therapy is over, the person is free to return to his or her normal life. 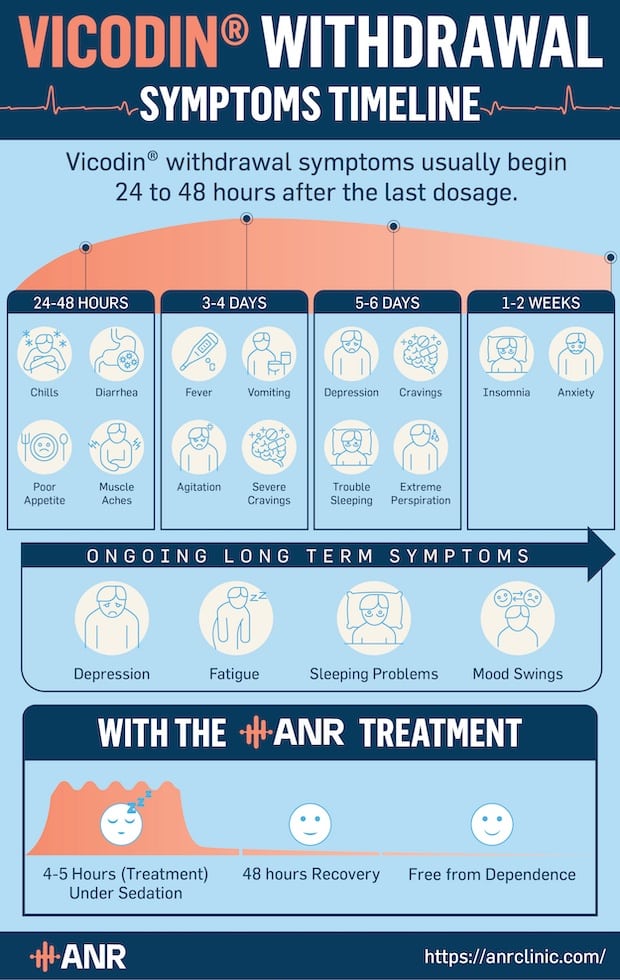 The goal of the ANR therapy is to return the chemical system into balance. This is achieved by forcing the central nervous system to decrease receptor production in order to allow the body to resume its own natural endorphin production. At the same time ANR enables the metabolization and elimination of introduced opioids. An ANR patient undergoes physical withdrawal while under sedation. Simultaneously, the process of accelerated neuro-regulation starts. That means that endorphin receptors are regulated, and their production is brought to their ‘pre-addiction’ state.

Dr. Waismann developed the ‘Rapid Detox’ concept in the 90s. Although the idea was very successful at the time, he soon realized that rapid detox could not correct the critical issue – the brain’s chemical imbalance.

However, because of Dr. Waismann’s initial success, rapid detox treatment was widely adopted by others and implemented in many detox and rehab centers. They were performing the treatment without sufficient medical experience, information or knowledge. As a result, rapid detox has often yielded poor results and sometimes serious complications.

One of the reasons rapid detox was not effective was partly due to the inappropriate use of the drug Naltrexone, a commonly used opiate antagonist. Naltrexone was (and still is) used in the wrong doses and for the wrong reasons. Rapid detox clinics sometimes use Naltrexone with minimal regard for each individual patient, which can be extremely dangerous.

While rapid detox is still widely promoted and offered in a range of detox and rehab clinics, for the last 25 years Dr. Waismann has stopped using rapid detox and replaced it with ANR.

Traditional opioid detox and rehab centers focus on treating the symptoms and painful effects of detox. Tapering off of a drug such as Vicodin, is a common part of the therapy. The whole process can be long and painful. What is more important is that the effects of traditional detox are not permanent because they do not treat the underlying physical causes of dependence and addiction.

The ANR treatment protocol in the USA is conducted at the Landmark Hospital of Southwest Florida. Using 25 years of Dr. Waismann’s extensive clinical and academic research, the Vicodin addiction treatment lasts 24 – 36 hours. During the procedure, the patient is sedated for four to five hours, depending on their level of Vicodin dependency, general health, and other issues.

The ANR procedure is conducted and monitored by an experienced team of medical professionals: a board-certified anesthesiologist who has extensive experience with critical care, an internist, and an intensive care nurse. The team uses critical care equipment to continuously monitor the patient’s real-time vitals. The patient receives several medications that control the pain and other symptoms of the withdrawal, balance the neuro-endorphin pathway, and consequently eliminate any future cravings for Vicodin and its dependency.

The protocol is designed in such a way that patients do not suffer from any pain during the withdrawal, and at the end of the procedure, as their endorphin imbalance is stabilized, they are free from the Vicodin cravings and dependency.

The ANR treatment in the US is performed at Landmark Hospital, an ultra-modern facility in Naples, Florida. The construction of the 50-bed critical care hospital was finished in 2015. It is equipped with ICU facilities adapted for the ANR procedure, with access to all the relevant medical equipment that might be required for the treatment of even the most complex conditions.

ANR Europe is located in Thun, Switzerland. Work is underway to establish a state-of-the-art facility and train a medical team on the ANR procedure. The idyllic town of Thun is located at the confluence of the Aare River and Lake Thun, 19 miles south of Bern.

ANR Clinic Georgia is located at the New Vision University Hospital in Tbilisi, Georgia. The local team of medical professionals has been extensively trained and supervised by Dr. Waismann.

As the number of facilities that offer Vicodin withdrawal services around the world grows, it is essential to remember that these facilities offer a treatment that is extremely fast and highly efficient. It offers not only the relief from the withdrawal symptoms but a permanent freedom from the Vicodin dependency. One short stay at the facility ensures that each patient can return home to a healthy life.

ANR is still the only procedure that treats the roots of opioid dependency. ANR uses modern medical research, extensive experience, and an awareness that the individual endorphin-receptor evaluation is crucial for treating Vicodin withdrawal symptoms and addiction.

ANR is fast, efficient, involving minimal discomfort and a short stay at an advanced medical facility. ANR allows patients to return to their normal lives free of addiction to Vicodin.

The Neurobiology of Opioid Dependence: Implications for Treatment