Subutex (known by the street name ‘subbies’) is a brand name for the drug buprenorphine, a partial opioid agonist widely used for the medication-assisted treatment of opioid addiction. Other buprenorphine medications, like Buprenex, Bultrans, and Belbuca, are also used to treat severe pain. The medical use of buprenorphine has increased in recent years. Already in 2010, there were 190 million buprenorphine dosage units distributed to pharmacies in the United States.

Subutex itself, however, has the potential for abuse and dependence. Abuse through intravenous injections or powder snorting may lead to the development of opioid addiction or dependence.

SUBUTEX sublingual tablet, contains buprenorphine, a partial opioid agonist, and is indicated for the treatment of opioid dependence and is preferred for. induction. Prescription use of this product is limited under the Drug. Addiction Treatment Act.

Subutex is a synthetic opioid drug and a partial, long-acting µ-opioid receptor agonist. This means it activates the opioid receptors slightly less than a full agonist like heroin. Subutex also has effects on the κ- and δ-opioid receptors. Due to its partial agonist pharmacological profile, the impact of Subutex plateaus at high doses. This is associated with a more beneficial safety profile.

Subutex is one of the drugs widely used for medication-assisted treatment of opioid dependence. During the medication-assisted treatment, the ingredient buprenorphine substitutes itself for the stronger opioid on which the patient is dependent. Over time the Subutex dose is tapered down. In this capacity, buprenorphine has been included in the WHO list of essential medications. Buprenorphine is also a potent analgesic, used for the treatment of severe pain not adequately controlled by non-opioid drugs.

Initially, Subutex (and its ingredient buprenorphine) was marketed as a drug with a very low potential for abuse. With time, however, it became clear that Subutex had its own potential for misuse. The number of cases in which buprenorphine has been sold on the black market, misused, or abused has markedly increased in recent years.

Subutex is most frequently abused by injecting it intravenously or by crushing pills and snorting the powder. One study found that, among patients receiving medication-assisted treatment for opioid dependence, 23% misused buprenorphine intravenously. In different groups of patients treated for opioid addiction, the number of individuals misusing buprenorphine has varied between 20% to 89%, but it is consistently high. Buprenorphine abuse can also develop in individuals who have not been prescribed the drug if they are able to access it by other means.

One of the strategies to decrease the abuse potential of buprenorphine has been the development of the drug Suboxone – a combination formulation of buprenorphine and the μ-opioid receptor antagonist naloxone. This has helped in the medication-assisted treatment of opioid addiction; however, during the induction phase of the treatment, the buprenorphine-only preparation Subutex is preferred.

How does opioid tolerance and dependence develop?

With long-term opioid use, the endorphin and opioid receptor system changes and adapts to a new functional level. Opioid receptors begin to respond to activation in a less pronounced manner leading to the development of opioid tolerance. Neuroadaptations in the opioid receptors and secondary messenger pathways get used to the new level of stimulation from the opioid abuse. In an attempt to get the same feeling as before, many patients begin to increase their dosage. Often this leads to a dangerous spiral of opioid dependence and addiction.

What are the dangers associated with buprenorphine misuse?

Symptoms of Subutex overdose may include:

The use of benzodiazepines (benzos), alcohol, or other drugs that act as central nervous system depressants, may lead to severe respiratory depression and even death. Neonatal opioid withdrawal syndrome may develop in newborns of women who abused buprenorphine during the pregnancy. The newborn may experience irritability, tremors, convulsions, apnea, or respiratory depression. As with all intravenous drug abuse, abusing Subutex intravenously opens up an individual to an increased risk of hepatitis and HIV infections.

How did the opioid crisis develop?

Opioid drugs relieve pain and induce euphoria through activation of the opioid receptors – specifically the µ-opioid receptors. When opioid drugs were first introduced to the market, their addiction potential was strongly underestimated, and they were commonly prescribed for pain relief.

As the cases of opioid misuse and overdose increased, so did the appearance of opioids on the streets. It became clear that opioid drugs were highly addictive. It is estimated that approximately 21% – 29% of patients with a prescription for opioid drugs to treat chronic pain would misuse them, whereas 8% – 12% develop an opioid addiction.

The opioid crisis has led to devastating public health, social, and economic consequences. In 2018, 128 people died every day in the United States due to an opioid overdose. The economic burden of the misuse of prescription opioid drugs in the United States alone has been estimated at $78.5 billion USD per year.

Subutex withdrawal symptoms are moderate and include: 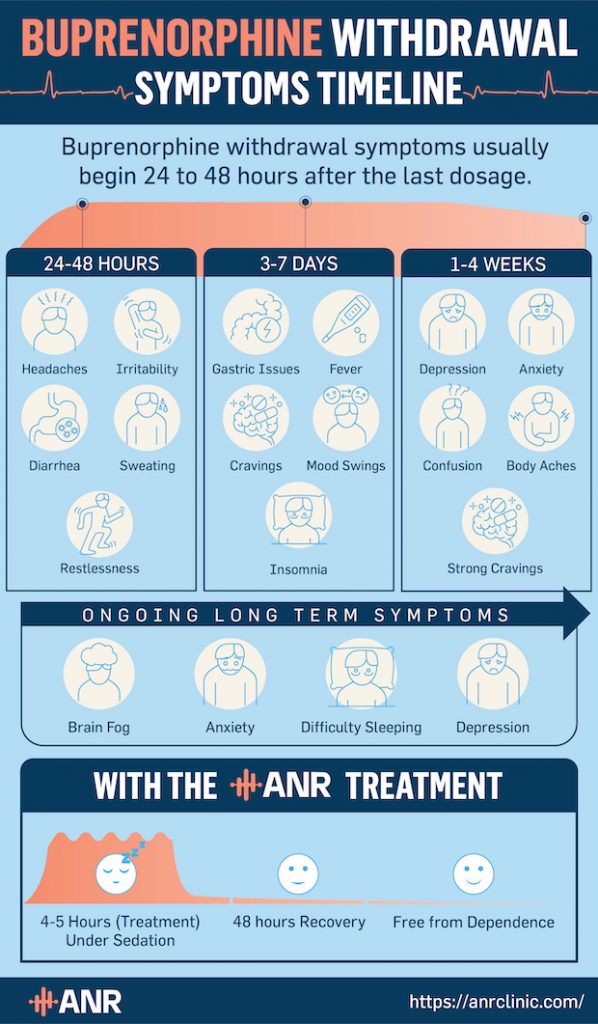 Buprenorphine is a semisynthetic opioid derivative of thebaine. It is a mixed agonist–antagonist opioid receptor modulator that is used to treat opioid addiction in higher dosages, to control moderate acute pain in non-opioid-tolerant individuals in lower dosages and to control moderate chronic pain in even smaller doses. It is available in a variety of formulations: Cizdol, Subutex, Suboxone, Zubsolv, Bunavail, Temgesic, Buprenex, Norspan and Butrans.

Subutex or buprenorphine withdrawal may invoke symptoms similar to those experienced when stopping other opioid drugs, such as morphine, heroin, and methadone.

Days 1 – 2
Withdrawal symptoms begin about 48 hours after the last dose. Headaches and irritability are common during this time.
Day 3
The third day is the peak of withdrawal symptoms. Muscle aches will grow more intense. Fever, chills, vomiting, and diarrhea may occur. Cravings are at their strongest around the 72-hour mark.
Days 4 – 6
Gastrointestinal issues, insomnia, and cravings may still persist. Mood swings are common.
Day 7+
One week after stopping Subutex or buprenorphine usage, symptoms should begin to subside. Some individuals may still endure symptoms like nausea, body aches, and anxiety. Psychological symptoms such as depression may begin to set in for an extended period of time.

It is not uncommon to relapse during Subutex withdrawal as many individuals will begin using buprenorphine again in order to mitigate the discomfort and often painful side effects. Cravings should be expected to continue so long as the endorphin-receptor system is left in a state of imbalance.

Detox from Subutex and buprenorphine

Opioid addiction is a disease that is characterized by biological changes in the brain. With continued opioid abuse, opioid receptors undergo neuroadaptive changes, and the natural production of endorphins is disrupted. This leads to tolerance and the need to take increasing opioid doses.

The developing neurobiological brain alterations lead to craving and compulsion to seek out the opioid drug despite the harm it causes. Patients who abuse Subutex and buprenorphine have a complex medical history. They may have undergone treatment for another opioid addiction and may have different comorbidities (other medical conditions).

The Accelerated Neuro-Regulation (ANR) focuses on the main biological cause of addiction. It brings the central nervous system back into balance and utilizes an individualized approach based on the individual’s medical and substance abuse history.
ANR returns the biochemical and opioid receptor balance toward its pre-addiction level, which counteracts the biological basis for cravings. For each patient, an individual approach is used. Dosing of naltrexone and adjunctive medications used during the ANR procedure is based on the duration and extent of opioid addiction and the presence of any other medical conditions.

Accelerated Neuro-Regulation (ANR) is a treatment for opioid addiction developed by Dr. Andre Waismann more than 20 years ago. It has been used to successfully treat 24,000 patients around the world with great success.

ANR represents an individualized approach that restores the balance of the brain endorphin and opioid receptor system in individuals with opioid addiction and reverses the brain’s neuroadaptive biochemical changes. The procedure is performed under sedation with an anesthetic to minimize the patient’s discomfort.

Opioid withdrawal is precipitated by the opioid antagonist naltrexone. The sedated patient is monitored closely by the medical treatment team and the withdrawal is controlled in a flexible and individualized manner.

The fact that the treatment is carried out under deep sedation minimizes the discomfort caused by normal Subutex withdrawal symptoms. During the withdrawal syndrome, the patient is supported by an experienced medical team with expertise in anesthesiology, intensive care, and internal medicine.

ANR treatment achieves a reset of the biological state of the opioid receptors. After the procedure, the patient is prescribed a daily naltrexone regimen. Its duration is determined on an individual basis, taking into account the patient’s personal medical history and needs. This personalized approach ensures the stabilization of the opioid receptor functional balance.

ANR differs from other methods for rapid or fast detoxification because it focuses on the biological basis of opioid addiction. Through the individually monitored and controlled precipitated withdrawal, ANR can bring the neurochemistry of brain opioid receptors and endogenous endorphins to normal levels.

The ANR procedure is performed during a short hospitalization. The ANR Unit of the Landmark Hospital in Naples, Florida, provides ANR treatment for patients with opioid dependence in the United States.

We conduct the ANR procedure in hospitals with state-of-art medical facilities, and our team includes experienced medical staff. ANR is performed in an intensive care unit, which gives the opportunity to collect advanced patient data in real-time and to ensure the safety of the patients.

Our medical team includes a board-certified anesthesiologist with experience in critical care, internal medicine physicians, and nurses with vast critical care experience. Consultants include expert cardiologists and nephrologists, which allows us to safely treat patients with opioid addiction who also have cardiovascular or renal comorbidities.

The combination of a highly qualified and experienced team with state-of-art facilities ensures that we can safely treat the biological roots of opioid addiction even in patients with a complex medical history.