Heroin /ˈhɛroʊɪn/ and commonly known by its street names of H, smack, boy, horse, brown, black, tar, and others is an opioid analgesic originally synthesized by C.R. Alder Wright in 1874 by adding two acetyl groups to the molecule morphine, which is found naturally in the opium poppy. It is the 3,6-diacetyl ester of morphine. Administered intravenously by injection, heroin is two to four times more potent than morphine and is faster in its onset of action. Illicit heroin is sometimes available in freebase form, dulling the sheen and consistency to a matte-white powder. Because of its lower boiling point, the freebase form of heroin is also smokable. It is prevalent in heroin coming from Afghanistan, which in 2004 produced roughly 87% of the world supply in illicit raw opium. However, the production rate in Mexico has risen sixfold from 2007 to 2011, changing that percentage and placing Mexico as the second largest opium producer in the world. As with other opioids, diacetylmorphine is used as both a legal, medically prescribed drug and a recreational drug, in which case the user is seeking euphoria. 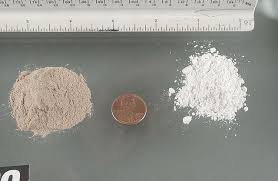 Heroin, also known as diamorphine among other names, is an opioid most commonly used as a recreational drug for its euphoric effects. Medical grade diamorphine is used as a pure hydrochloride salt which is distinguished from black tar heroin, a variable admixture of morphine derivatives—predominantly 6-MAM (6-monoacetylmorphine), which is the result of crude acetylation during clandestine production of street heroin. Diamorphine is used medically in several countries to relieve pain, such as during childbirth or a heart attack, as well as in opioid replacement therapy.[8][9][10] It is typically injected, usually into a vein, but it can also be smoked, snorted, or inhaled. In a clinical context the route of administration is most commonly intravenous injection; it may also be given by intramuscular or subcutaneous injection, as well as orally in the form of tablets.The onset of effects is usually rapid and lasts for a few hours. 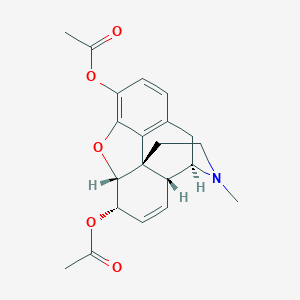 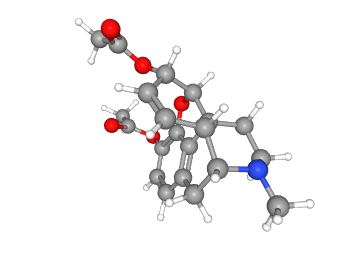 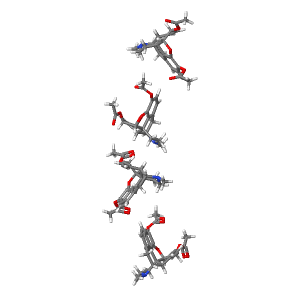 Heroin is a white or brown powder or a black, sticky goo. It’s an opioid drug made from morphine, a natural substance in the seedpod of the Asian poppy plant. It can be mixed with water and injected with a needle. Heroin can also be smoked or snorted up the nose. All of these ways of taking heroin send it to the brain very quickly. This makes it very addictive.

Major health problems from heroin include miscarriages, heart infections, and death from overdose. People who inject the drug also risk getting infectious diseases, including HIV/AIDS and hepatitis.

Regular use of heroin can lead to tolerance. This means users need more and more drug to have the same effect. At higher doses over time, the body becomes dependent on heroin. If dependent users stop heroin, they have Heroin withdrawal symptoms. These symptoms include restlessness, muscle and bone pain, diarrhea and vomiting, and cold flashes with goose bumps.
(source)

The opium poppy was cultivated in lower Mesopotamia as long ago as 3400 BC. The chemical analysis of opium in the 19th century revealed that most of its activity could be ascribed to the alkaloids codeine and morphine.

Diamorphine was first synthesized in 1874 by C. R. Alder Wright, an English chemist working at St. Mary’s Hospital Medical School in London who had been experimenting combining morphine with various acids. He boiled anhydrous morphine alkaloid with acetic anhydride for several hours and produced a more potent, acetylated form of morphine which is now called diacetylmorphine or morphine diacetate. He sent the compound to F. M. Pierce of Owens College in Manchester for analysis. Pierce told Wright:

Doses… were subcutaneously injected into young dogs and rabbit… with the following general results… great prostration, fear, and sleepiness speedily following the administration, the eyes being sensitive, and pupils constrict, considerable salivation being produced in dogs, and slight tendency to vomiting in some cases, but no actual emesis. Respiration was at first quickened, but subsequently reduced, and the heart’s action was diminished, and rendered irregular. Marked want of coordinating power over the muscular movements, and loss of power in the pelvis and hind limbs, together with a diminution of temperature in the rectum of about 4°. 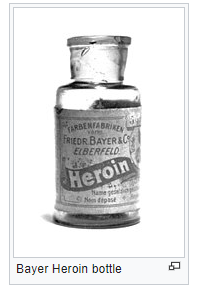 Wright’s invention did not lead to any further developments, and diamorphine became popular only after it was independently re-synthesized 23 years later by chemist Felix Hoffmann.[86Hoffmann was working at Bayer pharmaceutical company in Elberfeld, Germany, and his supervisor Heinrich Dreser instructed him to acetylate morphine with the objective of producing codeine, a constituent of the opium poppy that is pharmacologically similar to morphine but less potent and less addictive. Instead, the experiment produced an acetylated form of morphine one and a half to two times more potent than morphine itself. The head of Bayer’s research department reputedly coined the drug’s new name of “heroin,” based on the German heroisch which means “heroic, strong” (from the ancient Greek word “heros, ήρως”). Bayer scientists were not the first to make heroin, but their scientists discovered ways to make it, and Bayer led commercialization of heroin.

In 1895, Bayer marketed diacetylmorphine as an over-the-counter drug under the trademark name Heroin.[88] It was developed chiefly as a morphine substitute for cough suppressants that did not have morphine’s addictive side-effects. Morphine at the time was a popular recreational drug, and Bayer wished to find a similar but non-addictive substitute to market. However, contrary to Bayer’s advertising as a “non-addictive morphine substitute,” heroin would soon have one of the highest rates of addiction among its users.

From 1898 through to 1910, diamorphine was marketed under the trademark name Heroin as a non-addictive morphine substitute and cough suppressant. In the 11th edition of Encyclopædia Britannica (1910), the article on morphine states: “In the cough of phthisis minute doses [of morphine] are of service, but in this particular disease morphine is frequently better replaced by codeine or by heroin, which checks irritable coughs without the narcotism following upon the administration of morphine.”

In the U.S., the Harrison Narcotics Tax Act was passed in 1914 to control the sale and distribution of diacetylmorphine and other opioids, which allowed the drug to be prescribed and sold for medical purposes. In 1924, the United States Congress banned its sale, importation, or manufacture. It is now a Schedule I substance, which makes it illegal for non-medical use in signatory nations of the Single Convention on Narcotic Drugs treaty, including the United States.

The Health Committee of the League of Nations banned diacetylmorphine in 1925, although it took more than three years for this to be implemented. In the meantime, the first designer drugs, viz. 3,6 diesters and 6 monoesters of morphine and acetylated analogues of closely related drugs like hydromorphone and dihydromorphine, were produced in massive quantities to fill the worldwide demand for diacetylmorphine—this continued until 1930 when the Committee banned diacetylmorphine analogues with no therapeutic advantage over drugs already in use, the first major legislation of this type.[citation needed]

Use of heroin by jazz musicians in particular was prevalent in the mid-twentieth century, including Billie Holiday, saxophonists Charlie Parker and Art Pepper, guitarist Joe Pass and piano player/singer Ray Charles; a “staggering number of jazz musicians were addicts”.[93] It was also a problem with many rock musicians, particularly from the late 1960s through the 1990s. Pete Doherty is also a self-confessed user of heroin. Nirvana lead singer Kurt Cobain’s heroin addiction was well documented. Pantera frontman, Phil Anselmo, turned to heroin while touring during the 1990s to cope with his back pain. James Taylor, John Lennon, Eric Clapton, Johnny Winter, Keith Richards and Janis Joplin also used heroin. Many musicians have made songs referencing their heroin usage.

Prescription opioid pain medicines such as OxyContin® and Vicodin® have effects similar to heroin. Research suggests that misuse of these drugs may open the door to heroin use. Data from 2011 showed that an estimated 4 to 6 percent who misuse prescription opioids switch to heroin1-3 and about 80 percent of people who used heroin first misused prescription opioids.1-3 More recent data suggest that heroin is frequently the first opioid people use. In a study of those entering treatment for opioid use disorder, approximately one-third reported heroin as the first opioid they used regularly to get high.4

This suggests that prescription opioid misuse is just one factor leading to heroin use. Read more about this intertwined problem in our Prescription Opioids and Heroin Research Report.

People who use heroin report feeling a “rush” (a surge of pleasure, or euphoria). However, there are other common effects, including:

People who use heroin over the long term may develop: 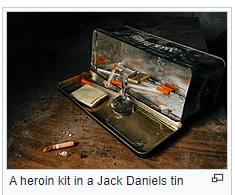 Heroin is an illegal drug that is very addictive. It is in the class of drugs known as opioids.

This article discusses heroin overdose. An overdose occurs when someone takes too much of a substance, usually a drug. This can happen by accident or on purpose. A heroin overdose may cause serious, harmful symptoms, or even death.

Most people who overdose are already addicted, but some people overdose the very first time they try it. Many people who use heroin also abuse prescription pain medicines and other drugs. They may also abuse alcohol. These combinations of substances can be very dangerous. Heroin use in the United States has been growing since 2007.

This article is for information only. DO NOT use it to treat or manage an actual overdose. If you or someone you are with has an exposure, call your local emergency number (such as 911), or your local poison center can be reached directly by calling the national toll-free Poison Help hotline (1-800-222-1222) from anywhere in the United States. 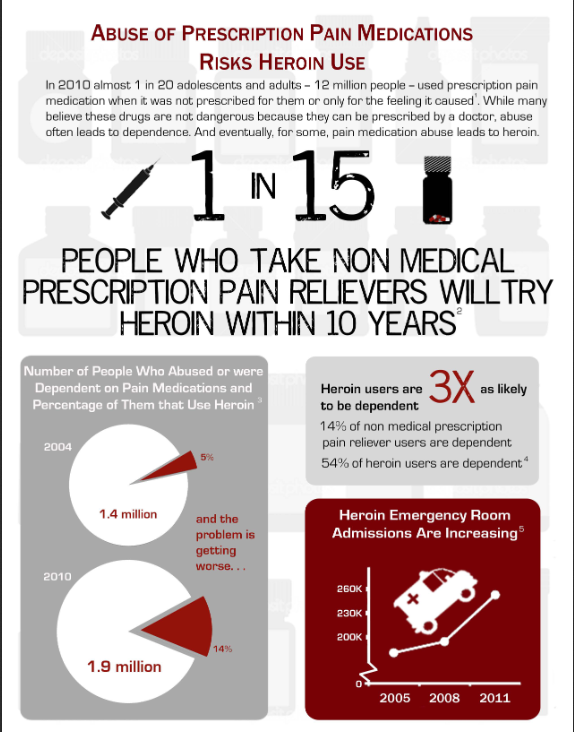 How do people use heroin?

What are the effects of heroin?

Heroin enters the brain rapidly and binds to opioid receptors on cells located in many areas, especially those involved in feelings of pain and pleasure and in controlling heart rate, sleeping, and breathing.

Can a person overdose on heroin?

Yes, a person can overdose on heroin. A heroin overdose occurs when a person uses enough of the drug to produce a life-threatening reaction or death. Heroin overdoses have increased in recent years.

When people overdose on heroin, their breathing often slows or stops. This can decrease the amount of oxygen that reaches the brain, a condition called hypoxia. Hypoxia can have short- and long-term mental effects and effects on the nervous system, including coma and permanent brain damage.

How can a heroin overdose be treated? Naloxone is a medicine that can treat an opioid overdose when given right away. It works by rapidly binding to opioid receptors and blocking the effects of heroin and other opioid drugs. Sometimes more than one dose may be needed to help a person start breathing again, which is why it’s important to get the person to an emergency department or a doctor to receive additional support if needed. Read more in the Substance Abuse and Mental Health Services Administration’s Opioid Overdose Prevention Toolkit.